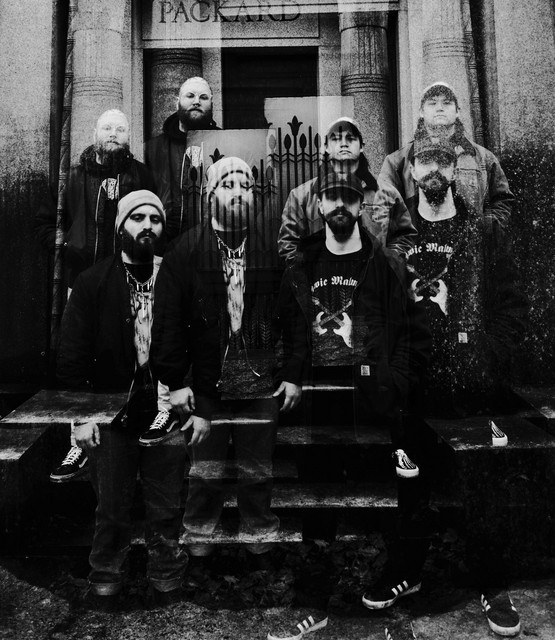 Shat out of hell, indeed. That’s the sonic stench that permeates the epically unpronounceable, utterly indecipherable and altogether uncompromising sound of Ohio’s notorious gore-merchants, SANGUISUGABOGG. Homicidal Ecstasy, the ‘Bogg’s second Century Media platter of splatter isn’t merely a return to the “down-tuned drug death” that defined 2021’s Tortured Whole. It’s the fluid-streaked byproduct of a band that hit the road like crazed serial killers and never looked back as they plunged deeper into a celebration of Mortician-worshiping brutal death metal sounds and splatter classics like Dead-Alive. They also became a badass live and studio proposition in the process.

“Everything became more legit,” states vocalist Devin Swank. Indeed, SANGUISGUABOGG has emerged from the pandemic, toured the US and Europe and with Homicidal Ecstasy made a record that will go down as a benchmark for modern death metal. They’re no longer that band of meme-inspiring miscreants. “The musicianship, the production, the lyrics – which delve much more into horror and body horror – are more thought-out,” says Devin. “It’s not just a bunch of dick and fart jokes.”

Make no mistake - the ’Bogg hasn’t gone soft. From the album’s gurgling opener, “Black Market Vasectomy”, Homicidal Ecstasy is very much SANGUISUGABOGG. It maintains the queasiness-inducing feel of 2019’s debut EP, Pornographic Seizures while serving up a bloody dollop of refined riffage. “Face Ripped Off”, which features Jesus Piece frontman, Aaron Heard testing the lows of his throat, is bowel-rattling as it gets while tracks like the manic “Skin Cushion” accelerates, swerves and then smooshes the senses courtesy of drummer Cody Davidson’s almost jazz-like rhythms.

“After lockdown, once the restrictions from Covid lifted, we were hungry not just tour but start writing again,” recalls Devin. “Ced [Davis] had moved from bass to guitar and Drew [Arnold] also started playing guitar. The feeling was the sky’s the limit. That’s when we started writing and adding new songs like ‘Necrosexual Deviant’ to the set – and starting to see the new songs getting better reactions than songs from the previous two records!”

It was Davidson who once again helmed production duties for Homicidal Ecstasy. Heading from tour to the studio, SANGUISUGABOGG blasted through a set of road-hammered songs before handing off mixing duties to Converge guitarist and vaunted studio vet, Kurt Ballou (High on Fire, Nails) at God City Studios in Salem, Massachusetts. “I would call that our ‘Come to Jesus’ moment,” says Devin. “We’re huge fans of Kurt’s music and love the sound of his records. We wanted to work with him long before we were signed to Century Media and what we got back exceed our expectations He took SANGUISUGABOGG and made it sound like us on steroids!”

SANGUISUGABOGG’s bloody rise (their name, in fact, is an anagram for ‘Bloody Toilet’) was as unexpected to the underground death metal sect as it was for the ‘Bogg.. After releasing Pornographic Seizures in 2019 on the cult Maggot Stomp label, the foursome quickly won fans for their blasts of sludgy, determined riffing, tongue-severed-from-cheek, gross-out humor and nods to hardcore and 90’s East Coast death metal. “The logo definitely helped,” smirks Devin. “It’s the Nike swoosh of death metal!” Hitting the road with the likes of Creping Death, Frozen Soul and Vomit Forth, SANGUISUGABOGG received a pile of plaudits including Brooklyn Vegan putting them on a Most Anticipated Albums list next to genre titans like Carcass. “We got mentioned on NPR shortly after we dropped the first track off our EP!” says Swank, still in disbelief. “SANGUISUGABOGG was literally something that came together out of thin air. The first time we got together, we wrote and recorded our first four songs. Something was in the air.”

In the face of Covid-19 and a worldwide shutdown and shitshow, the ‘Bogg got down to business. Signing to Century Media, they recorded Tortured Whole and hit the road as the locked-down world started to get on its feet. Later that year, they teamed with the infamous Troma Films collective on for two video clips that featured battling penis monsters, boner implants and Troma’s own Sgt. Kabukiman!

The 2021 US “Frozen Whole” tour with longtime friends and labelmates, Frozen Soul cemented SANGUISUGABOGG as standard-bearers for death metal’s next generation. “It definitely felt like the torch was being passed from that Swedish sound that was an homage to early-90’s death metal to a more brutal, direct approach and influences like Suffocation and Pyrexia,” says Devin. “Everything is cyclical. We made it even more direct, bouncy and grimy.”  Tours with Nile, Terror, The Acacia Strain and a run of dates as main support to Cannibal Corpse leading into Decibel Magazine’s Metal & Beer Fest in Philadelphia solidified SANGUISUGABOGG as a force in their own right, “It still blows my mind that a band like Terror or Cannibal Corpse, bands that are legends to me, that I’ve been listening to for years would even think to take us on the road,” marvels Devin. “It’s even more mind-blowing to me that their fans would get off on what we do!”

Homicidal Ecstasy isn’t merely a musical maturation for the gore-obsessed boys of the ‘Bogg. While Swank’s lyric writing sessions are still “fueled on coffee with a horror movie playing in the background”, this isn’t exclusively the gross-out show of SANGUISUGABOGG past. “It goes deeper this time, into the psycho-sexual, body-horror, why what some people see as perverse or fetishistic, can also be perfectly normal,” says Devin. “There’s even a song called ‘Mortal Admonishment’ where I talk about how I deal with death. I wanted to write a song about my grandmother and how I got the news about her cancer and how I internalized it. It’s standard in death metal to talk about death but who has talked about the grieving process?

“It’s kind of an homage to real life,” says the frontman. “When shit hits the fan, no one’s really safe.” Reconstituted, regurgitated and reenergized, SANGUISUGABOGG walks among us. Let the Homicidal Ecstasy begin!